Well, now THIS is more like it. Aspirin’s got nothing on Zyprexa as a wonder drug: thirty-six hours after taking the first dose, I’m fine. There’s the occasional foot- or finger-tapping, but I realize almost immediately when I’m doing it and can stop. I couldn’t do that even as late as last night. This morning when I woke up, I knew instantly that I was better, and even though I was up in the night coughing (again……still) I didn’t feel the least bit strung out.

I know I’ve sung the praises of Vitamin Z before, even as I resent the circumstances that require me to use it every so often. I can’t take it full-time because it makes my blood sugars fly out of control and puts on pounds practically overnight, but there is absolutely nothing better than a short course when it comes to corralling a hypo/manic episode. I’m just thankful Dr. Awesomesauce  let the leash out a little on this one and gave me some discretion as to when to take it; he’s going to Hawaii for two weeks, so this is obviously not a good time for me to go bonkers. (As if there were EVER a good time for that.)

For some time after he prescribed Zyprexa for PRN use, I wondered why he didn’t just put me on Ambien or some other sleeping pill. I didn’t ask, mainly because those meds are habit-forming and I already have enough trouble with addictive behavior as it is. But once I got it through my head that I will almost always become hypo/manic if I don’t sleep well for more than two or three nights, it made perfect sense. Talk about killing two birds with one stone. DUH. That’s why he gets the big bucks and I don’t.

Of course, there is always a battle between the patient who doesn’t want to take extra medication and the nurse who knows she needs it. But they’re less intense and much shorter than they used to be, and I end up surrendering to the inevitable because it’s in my best interests to do so. I’ve had a couple tastes of lasting remission, and I really, REALLY enjoyed them……you know, “I like it, I love it, I want some more of it”.

Besides—speaking of birds—I’ve got this guy to remind me that mania is most definitely not my friend: 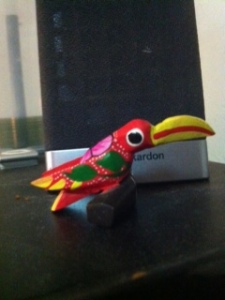 That’s Toucan Sam, who lives on top of my computer tower. He’s just a funny-looking wooden toy made in Mexico, but whenever I’m wavering between acting on a budding issue and letting it run wild, a glance at him encourages me to extricate my head from my rectal vault and do the right thing.

Which, for the time being, means taking my “wonder drug” without debating it to death. 🙂

I'm a retired registered nurse and writer who also happens to be street-rat crazy, if the DSM-IV.....oops, 5---is to be believed. I was diagnosed with bipolar I disorder at the age of 55, and am still sorting through the ashes of the flaming garbage pile that my life had become. Here, I'll share the lumps and bumps of a late-life journey toward sanity.... along with some rants, gripes, sour grapes and good old-fashioned whining from time to time. It's not easy being bipolar in a unipolar world; let's figure it out together. View more posts

One thought on “Z: The Wonder Drug”